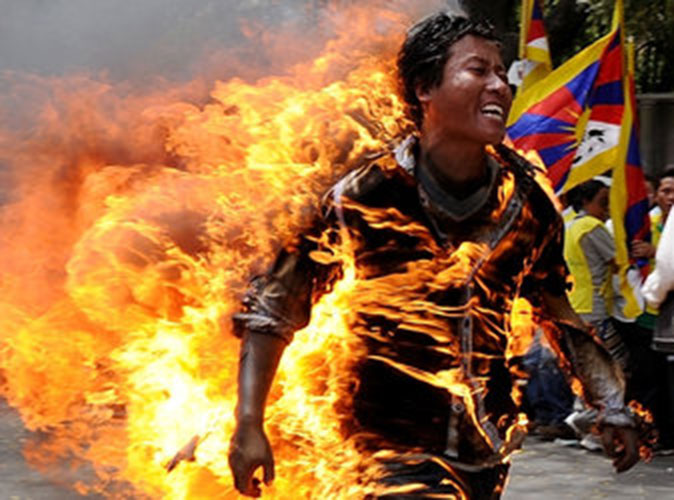 HONG KONG — What pushes them to do it, these desperate Tibetans, more than 90 of them, dozens in recent days and another one on Monday, the ones drenching themselves in gasoline, sometimes even drinking the fuel beforehand, and then setting themselves on fire, their robes bursting into pennants of flame as they die such painful deaths, why, what is happening here? Are they killing themselves because of politics, sadness, despair, religion, what?

We don’t yet know what drove Lobsang Gedun, 29, a Buddhist monk who burned himself to death on Monday in the western Chinese province of Qinghai. My colleague Edward Wong reported on the death, and Radio Free Asia quoted an account of the immolation: “With his body on fire, he walked about 300 steps with hands folded in prayer posture, and raised slogans before he collapsed dead on the ground.”

Lobsang Gedun’s slogans were likely in praise of the Dalai Lama, the exiled spiritual leader of Tibetan Buddhists, or condemnations of Beijing’s harsh, militarized rule in Tibet and the Tibetan areas of western China. Foreign reporters, United Nations investigators and many international relief groups are almost universally barred by the Chinese authorities from entering Tibet.

“The Chinese still blame everything on us,” the Dalai Lama said in an interview with The Hindu newspaper. “If the Chinese have the confidence, they must allow the international community to see the truth. That is very important. If they do not allow, it is an indication that they have the feeling of guilt, that they have something to hide.”

“The Chinese propaganda always says the Tibetan people are very happy, that they were liberated from the feudal system under the Dalai Lama,” he said. “So now their propaganda is on shaky ground.”

The full interview, conducted in July at the Dalai Lama’s residence in the Indian hill-station town of McLeod Ganj, in Dharamsala, can be seen here.

A harrowing and deeply reported piece in National Geographic by Jeffrey Bartholet examines the final days and fiery death of one self-immolator, a young exile named Jamphel Yeshi, who burned himself to death in a Tibetan enclave of New Delhi in March.

He was known as Jashi to his friends. He had a couple of dragon tattoos on his muscular body, and he was known as a strong swimmer. During the winter back home in Tibet he loved to go sledding on makeshift toboggans.

He fled Tibet on foot in 2006 and eventually made his way to Dharamsala, home of the Tibetan government in exile, “where every newcomer gets an audience with the Dalai Lama, and everyone gets free schooling,” Mr. Bartholet writes.