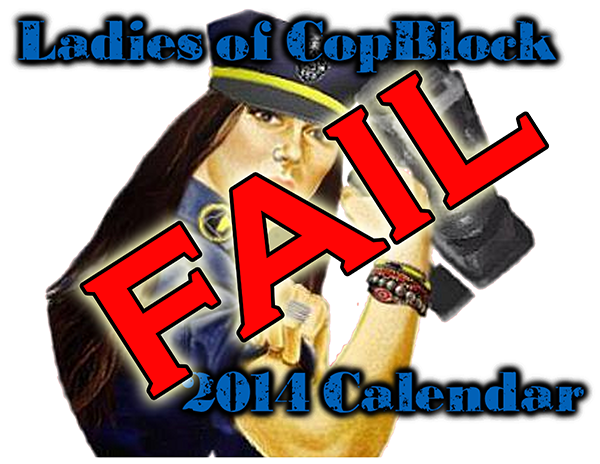 Yesterday, I was approached by Alma Sommer via Facebook. She asked if she could use PeaceNewsNow.com as a platform to blog about a recent dispute within her community. I created her a username and password, and she wrote everything below, without any edits by me. My goal in allowing this to be published on my website is, as I told Alma, to solve this problem without the use of the state. Courtrooms used to be the place to bring all of your facts and info and stories and get it all out in one place. In the 21st century, a blog post can do this better. I hope that in the spirits of peace, truth, and cooperation, this issue can be resolved through investigation of the facts and peaceful dialogue. I never censor or delete comments. To show that I have no bias, I invite any of the Ladies of CopBlock, or anyone who seeks a peaceful resolution to a conflict, to blog about it here on PeaceNewsNow.com. – Derrick J Freeman

The Ladies of CopBlock calendar debacle has been kept secret from the public. It is now time to make public the information within.

Six Ladies withdrew from the calendar before publication for many different reasons. Mostly due to each individuals concerns being disregarded.

Most of the group was documented before it was closed off to some of the Ladies. The threads have been put together for your viewing pleasure.

Also here are a few statements as to why the Ladies opted out.

“I chose to disassociate myself from the Ladies of CopBlock calendar project due to a lack of respect regarding major concerns with the final project voiced by myself and other participants.”

“After the project was delayed, the original intent of the product was lost. When evidence of where funds were could not be produced when asked, adhominem attacks were the only reply we got. This is why I chose to withdraw my involvement; however I continue to support CopBlock and the new Women of CopBlock.”

“I regret to inform my friends and supporters than I can no longer consent to involvement in a project I was led to believe was for copblock due to profound differences in principles. I have witnessed very little transparency, accountability or any other values I’ve learned to appreciate through cb. While I can not promise a calendar, I can promise I will not stop until the truth of the funds is made available and our generous donors be made aware of such. I am currently comfortable claiming that I believe Lauryn has committed fraud and gathered these funds on behalf of my friends and I to promote herself.”

“I chose to withdraw from the Ladies of CopBlock calendar due to philosophical differences. My goal is to promote spontaneous order and Agorist principles in all things. Concerns were met with a blatant disregard, instead of transparency, therefore loosing my support of this project. I strongly urge the donors to ask for their money back”

“My choice to disassociate from this project is due to lack of organization and major concerns voiced by many of those involved left unaddressed. However, I remain a strong supporter of CopBlock and new Women of CopBlock”

“After months of delays on the Ladies of CopBlock calendar, we were told the final product would be “amazing”.  I think we all assumed a calendar was not that hard to make look good, and after such extreme delays, I was expecting something great. What we were shown as the ‘final product’ was not only hideous, it was filled with spelling and grammatical errors (my name wasn’t even spelled right).  All the girls voiced their concerns, including the fact that the calendar was now so late that a couple of the months were no longer of use. Rather than address the concerns, our comments were met with anger and resentment. We were told it couldn’t change, cause the printers had already been paid a nonrefundable deposit. When I asked about this policy, the story changed to “no deposit, but the printer was prepaid, and we couldn’t get the money back”. Again, I asked about this policy, and the story changed again to “the money is in the bank account of Lauryn’s mother.” Because the story of where the money was kept changing, myself and others thought it would be best to get financial records and/or move the donated funds to a neutral 3rd party. Once again our requests were met with anger and verbal attacks. The general behavior came off as dishonest and angry; and the concerns of the girls regarding changes needed to the calendar were being disregarded and treated with utter contempt. For these reasons, I was no longer comfortable being a part of this project, as it was no longer clear where the money was or what the message of the project was. I hope the money is returned in full to the donors; however, I still have concerns that the money may be partially missing. I would hope that the donors could contact me if they are not refunded in full.”