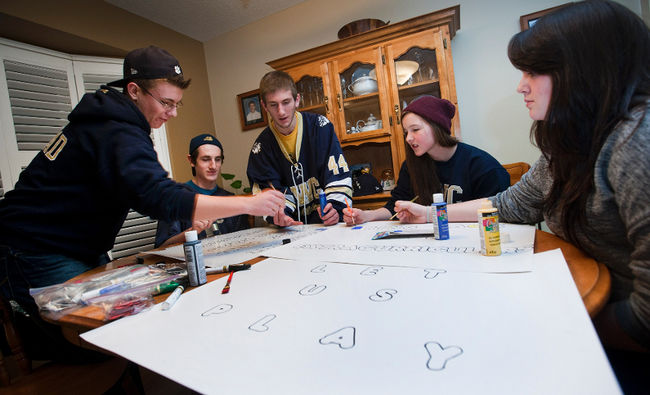 From The Standard by Marlene Bergsma

Thousands of high school students across Niagara are taking to the streets Monday in protest, saying they feel they are being used as pawns in a labour dispute between their teachers and the government.

Students at Laura Secord, Sir Winston Churchill, Grimsby Secondary and Westlane secondary schools are among those who are are skipping classes or organizing other events to say they oppose their teachers’ cancellation of study help and extracurricular activities.

In Niagara, members of the Ontario Secondary School Teachers Federation District 22 recently voted to reject a tentative agreement negotiated between their union and the District School Board of Niagara.

“We are fighting for ourselves,” said Drew Chapelle, one of the organizers of Sir Winston’s student protest that’s being dubbed Project Mayhem.

In some schools, the student walkout is being billed as a protest against Bill 115 — the government legislation that has earned the teachers’ ire — but organizers of Sir Winston’s protest say they aren’t taking sides.

They just want people to know it’s their university admissions, scholarships and high school sporting events and fun that are at stake.

“This is our way of standing up for ourselves,” said Tyler Davis, one of the Sir Winston organizers.

“We know you guys are fighting, but don’t bring us into your mess.”

Both Davis and Chapelle are in Grade 12 and say this a crucial time for their post-secondary futures. University offers of admission or scholarships can be affected by the loss of extracurricular activities.

“Some scholarships ask for a brag sheet about yourself,” Davis said. “And some schools, like Queens, look at extracurriculars for admissions.”

But other students are conflicted about the immediate harm the walkout might cause their academic standing.

“I fully support this, but I may not be able to attend,” posted one student on the Sir Winston group’s event page on Facebook.

“Teachers aren’t being as understanding as people may think. With two quizzes and an in-class essay on Monday, it’s not right for me to go. Good luck everyone, plead our cause and stay warm.”

Chris Godin of Niagara Falls is another one of the students who is trading his textbooks for a protest sign. He will be among the students from Westlane walking along Lundy’s Lane, armed with signs urging “Kill Bill 115.”

“We’re not choosing sides,” said the Grade 12 student. “But we’re students and we’re the reason the teachers are there. They should definitely put us first in consideration.”

Similar walkouts are planned at high schools across the province, including Oakville and Waterloo. The students are using social media such as Facebook to spread their message. By Sunday afternoon, more than 400 Sir Winston students had confirmed on the Project Mayhem Facebook event that they are joining Monday’s protest.

Chapelle said their teachers told them it had to be a legitimate protest with signs and a clear message, and not just a way to skip class.

Meanwhile, on Tuesday about 1,600 elementary teachers with the District School Board of Niagara are staging their one-day strike protesting Bill 115, with classes cancelled for all elementary students.

— with files from QMI