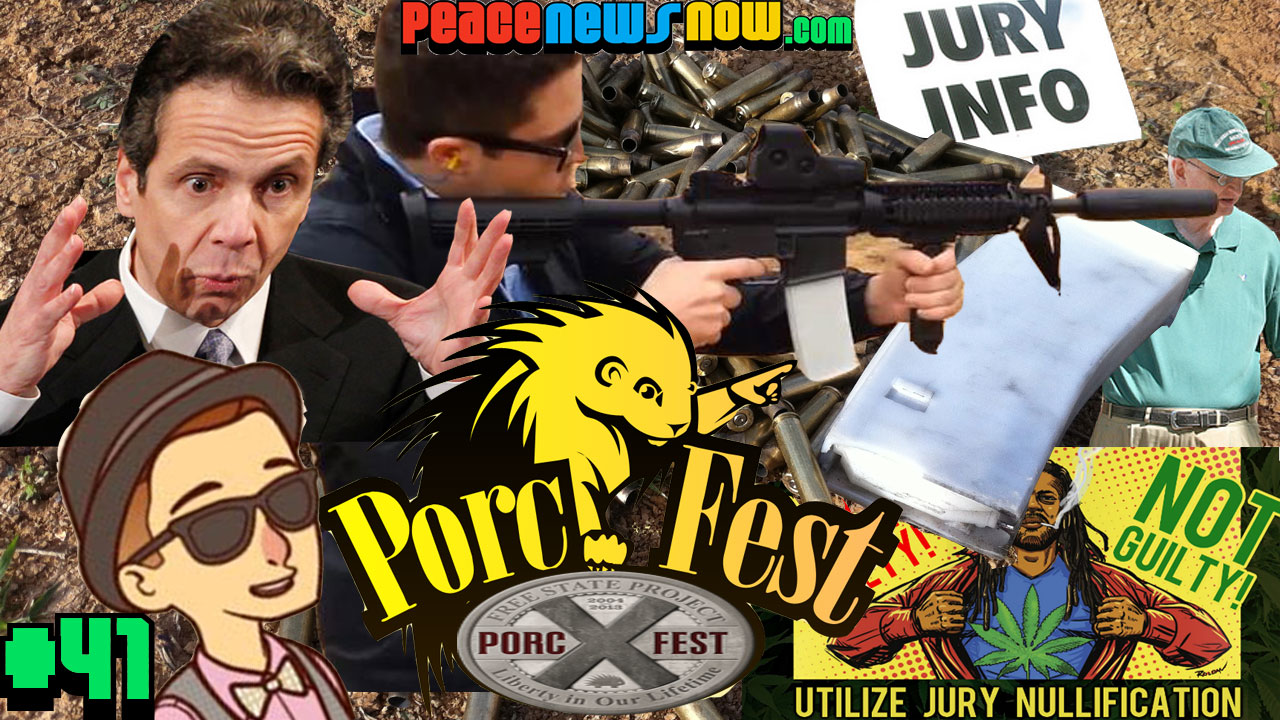 Intro: Drop in, and Opt out. I’m DerrickJ. You’re listening to Peace News Now, your daily 5-minute update on the growing peaceful evolution around the globe. Today is Monday, February 11th 2013. Here’s what’s happening in the world of Peace:

First, news from the Shire:

Do you want Liberty in your lifetime? Move to New Hampshire & Join the Free Staters! Over 1000 early-movers have already arrived and are getting active enhancing liberty. Numbers make a crucial difference. Combine your efforts with others to maximize your impact. Get started at FreeStateProject.org .

The Porcupine Freedom Festival, endearingly referred to as PorcFest, is the Free State Project’s flagship annual summer gathering in the White Mountains of New Hampshire. This year, it’s happening June 17th to 23rd. PorcFest is a gathering of over a thousand of the world’s finest freedom-lovers. The week-long event is safe, fun, and friendly, and is packed with parties, panels, classes, delicious food, children’s activities, and much more. A beautiful new website advertising the event just launched this week at PorcFest.com, that’s Porc with a “C,” as in “PorCupine.” Buy your tickets before February 25th to qualify for an early bird discount of 30% off. I’ll be there. Will you join me?

A recent video by New Hampshire media man Dave Ridley highlighted the efforts of the peaceful people of FreeGrafton in the Shire. FreeGrafton is arguably America’s freest town, but it’s not exempt from Washington DC’s Police State or Drug Wars. Rather than address the so-called “representatives” of the District, some residents of FreeGrafton have proposed to their local town government a bill that would allow volunteers to mail pamphlets to all voters living in the town. Funds for the project would be raised voluntarily, and the pamphlets would include information about Juror’s rights–primarily, a juror’s right to nullify bad laws by voting his or her conscience.

It is the law in New Hampshire, and indeed it is natural law everywhere, that a person has the right to judge the LAW as well as the facts before them. These informational mailers would inform you that you have the right, as a member of a jury, to nullify a law which you deem immoral.

So, for example, if you were opposed to the war on drugs, and you were on the jury for a pot possession charge, even if you know that the evidence was abundant and clear that the accused person was indeed growing marijuana, an illegal act, you could STILL say he is NOT GUILTY because you disagree with the law itself. This act, called “Jury Nullification” has been utilized with success for some Free Staters and freedom-lovers across the continent. One recent example includes a New Hampshire man who grew 15 marijuana plants in his backyard, a crime which carries a penalty of decades in prison. The grower was released on a verdict of NOT GUILTY because the jury disagreed with the law. (http://www.prweb.com/releases/2012/9/prweb9907650.htm )

(Below is the text of the Grafton bill)
‘To see if the Town shall notify the voters of Grafton of their natural and historic right and responsibility as jurors, sitting on juries in all cases including grand juries, to judge the law as well as the facts before them, a right recognized by the State of New Hampshire with the passage of HB146 (Laws of 2012, c. 243) and codified as RSA 519:23-a, which states that ‘in all criminal proceedings the court shall permit the defense to inform the jury of its right to judge the facts and the application of the law in relation to the facts in controversy.” The information shall be sent by the Town to all voters individually via first-class mail, and shall be prepared entirely by volunteers, information which may include pamphlets prepared by the Fully Informed Jury Association, a federally-recognized 501(c)(3) organization. All costs shall be paid using voluntarily raised funds.’ ”
Are you tired of the US government killing people around the world?
Are you tired of having to pay for their murderous rampage?
Are you tired of feeling helpless to do anything about it?
Well now, there is something you can do.
It is called Bitcoin.
Bitcoin is money that is impossible for the government to control.
Bitcoin is impossible to be counterfeited or inflated.
Bitcoin is simply a peer to peer protocol, so it is impossible for anyone to shut it down, block it, or control it in any way.
If you want to see an end to the government inflating the dollar to pay for murder, then you need to start using Bitcoin today.
To learn how, visit www.WeUseCoins.com

The 3-D printing gunsmiths at Defense Distributed are about to release blueprints for an upgraded magazine that won’t degrade even after you fire hundreds of rounds. According to the group’s founder, Cody Wilson, Defense Distributed fired a total of 342 rounds using the magazine in recent tests at a gun range near Austin, Texas, with no issues. Hilariously, Last month, Rep. Steve Israel of New York called for 3-D printed magazines to be banned. However, the 3-D printers used to make the magazines use layers of thermoplastics and computer-aided design files to construct everyday objects. The magazines and other gun parts can simply be printed from an unlimited internet database. Checkmate, gun control.

Outro: That’s all the time we have for today. Links to these stories can be found in this episode’s show notes. PNN is on YouTube, iTunes, Twitter, & Facebook. If you enjoyed this episode, share the peace with your friends. For PeaceNewsNow.com, I’m DerrickJ. Peace!