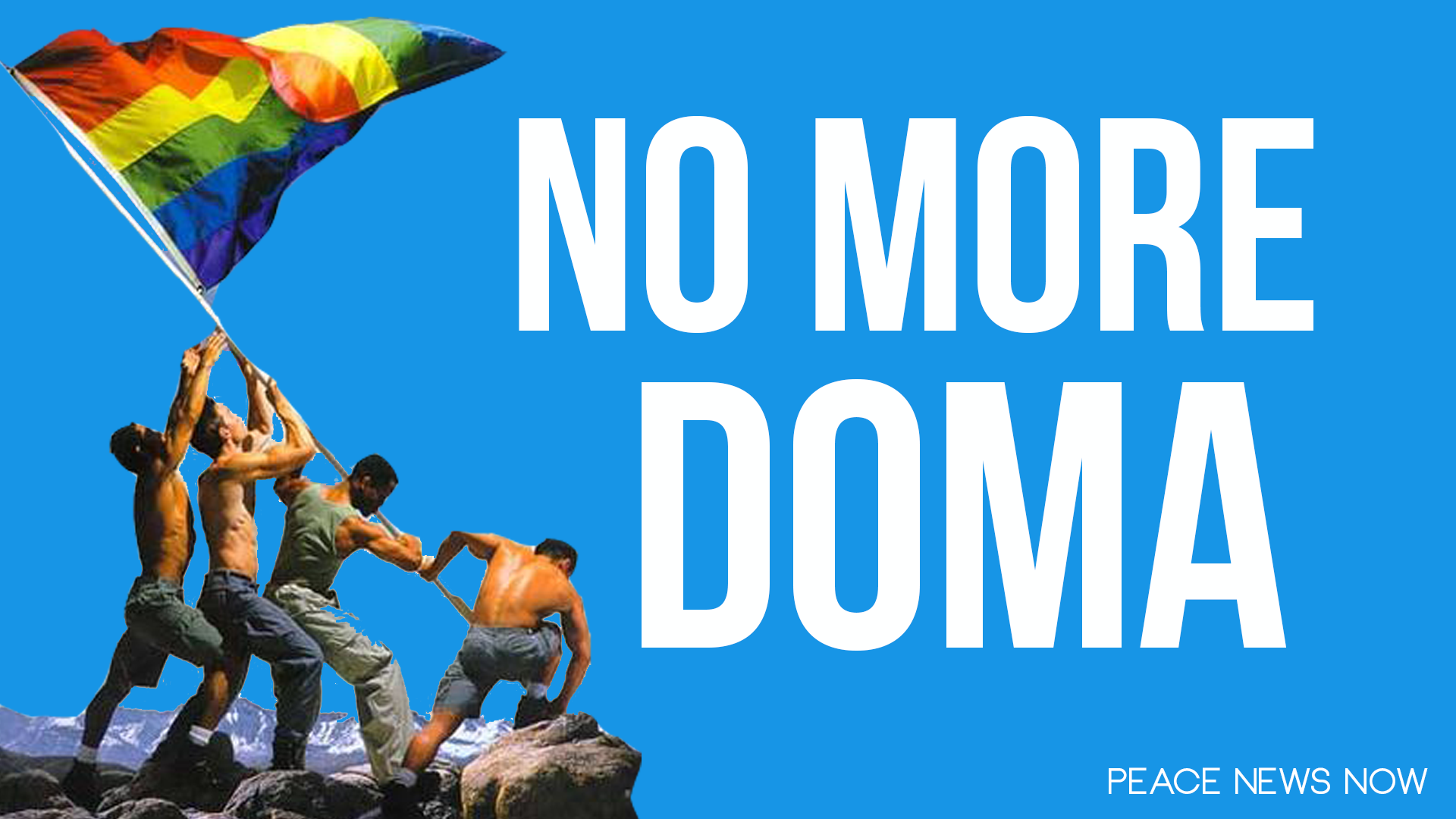 PorcFestX is over. The Peace News Now crew had a solid presence throughout the week and connected with hundreds of peaceful people. Highlights included David Friedman debating Robert Murphy, speakers such as Larken Rose, Ian Freeman, Ben Stone, and JG Vibes, plus karaoke, bonfires, and dancing. If you missed PorcFest, you won’t want to miss the Keenevention, happening in Keene in the Shire November 1st to the 3rd. See speakers and panels comprised exclusively of Shire folk, and participate in local activism such as Robin Hooding. Learn more at Keenevention.info . That’s Keenevention.info

DOMA, the Defense of Marriage Act, was a US federal law that allowed state agents to refuse to recognize same-sex marriages performed in other states. Yesterday this provision was struck down by the supreme court as unconstitutional, quote, “as a deprivation of the equal liberty of persons that is protected by the Fifth Amendment.”

Some supporters chanted, “USA! USA!” apparently forgetting the party responsible for oppressing them in the first place.

Interestingly, though DOMA has been law since 1996, it was only until this year that it was challenged in court. The reason? According to Bloomberg, the NY woman who challenged DOMA was facing half a million dollars in taxes from when her gay lover died. Had the people calling themselves the federal government recognized their marriage, she would not have been extorted.

Just to be clear, so the gays hear it: This woman’s inspiration in challenging this decade-old law was not equality but tax resistance.

According to Dale Everett of Flaming Freedom, quote:

“People wanted government involved in marriage so they could control people and reward them through government for behavior they felt was moral. This [repealing of DOMA] is a step toward getting gov back out of marriage. Now that it’s not serving its purpose as well (controlling people), even social conservatives will soon be on board with getting government out of marriage as it should be.”

Have you heard of Bitcoin?

Faster than credit cards–and no chargebacks!

Send money to friends and merchants DIRECTLY, without using a bank.

They’re free to accept, plus generate new business from the bitcoin economy.

They aren’t tied to your name, so your identity is safe.

Spend them online or in retail stores using your smartphone.

Learn more about bitcoin at WeUseCoins.com

NSA whistleblower Edward Snowden today is sitting inside a Russian airport, where he could be waiting for months. According to the Telegraph, Snowden applied for asylum in Ecuador. However, the man who calls himself the president of Ecuador will not grant his approval for Snowden to walk on HIS section of the earth. In the meantime, men calling themselves the US government have invalidated Snowden’s passport in an attempt to capture him. It is uncertain at the time what will be the fate of the 30-year-old man who informed Americans that their government is spying on them through their computers, cell phones, and even microwaves.

Speaking of microwaves, Can Pot Cure Cancer? Some say yes, others say it’s a definite maybe.

Danny Panzella of TruthSquad.TV and the Peaceful Streets Project NYC is producing a feature documentary on the medical and nutrition benefits of cannabis.

The film is based on the research of Dr. William Courtney http://www.youtube.com/watch?v=1SGNR4cb7jc

Principal photography begins in August and Danny is raising funds to pay for travel for him and a camera crew to begin interviewing in Denver Colorado–home to newly legal Cannabis. Danny will also be filming in Austin, Texas, where he will be killing two birds with one stone and also attending the Peaceful Streets Project National Conference.

The fundraiser covers travel and film crew expenses for the week of Aug 17th.

Danny thanks you in advance for supporting this project and has offered tiered-level rewards to incentivize donations.

Learn more about this project through the links in this episode’s show notes.

Links are in the show notes.