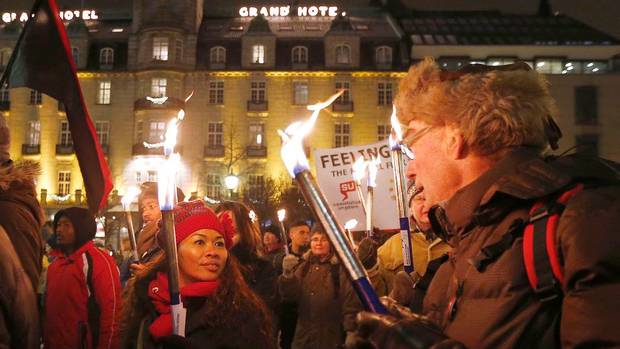 (NEWSER) – The European Union officially received the Nobel Peace Prize today in an Oslo ceremony attended by some 20 EU leaders, including Angela Merkel, Francois Hollande, and UK deputy PM Nick Clegg. The prize committee applauded the EU’s efforts toward peace in Europe after World War II, and called leaders to work together amid the economic crisis, the AP notes. This year’s ceremony was more austere than usual, with prize money cut 20% and fewer chauffeured cars for winners,Reuters reports. Protesters in Oslo and worldwide voiced opposition to the award.

Previous winners, including Archbishop Desmond Tutu, Northern Ireland’s Mairead Maguire, and Argentina’s Adolfo Perez Esquivel, said the $1.2 million in prize money shouldn’t be paid out this year; the EU, they said, uses military power for security, which isn’t in keeping with the prize’s ideals. Yesterday, hundreds of protesters took to the streets in Oslo, chanting, “The EU is not a worthy winner,” the New York Times reports. Peace activists argued that a prize initially aimed at disarmament shouldn’t go to the bloc, while a Greek MP said the EU had “pushed my country and the whole of southern Europe back to the Middle Ages.”