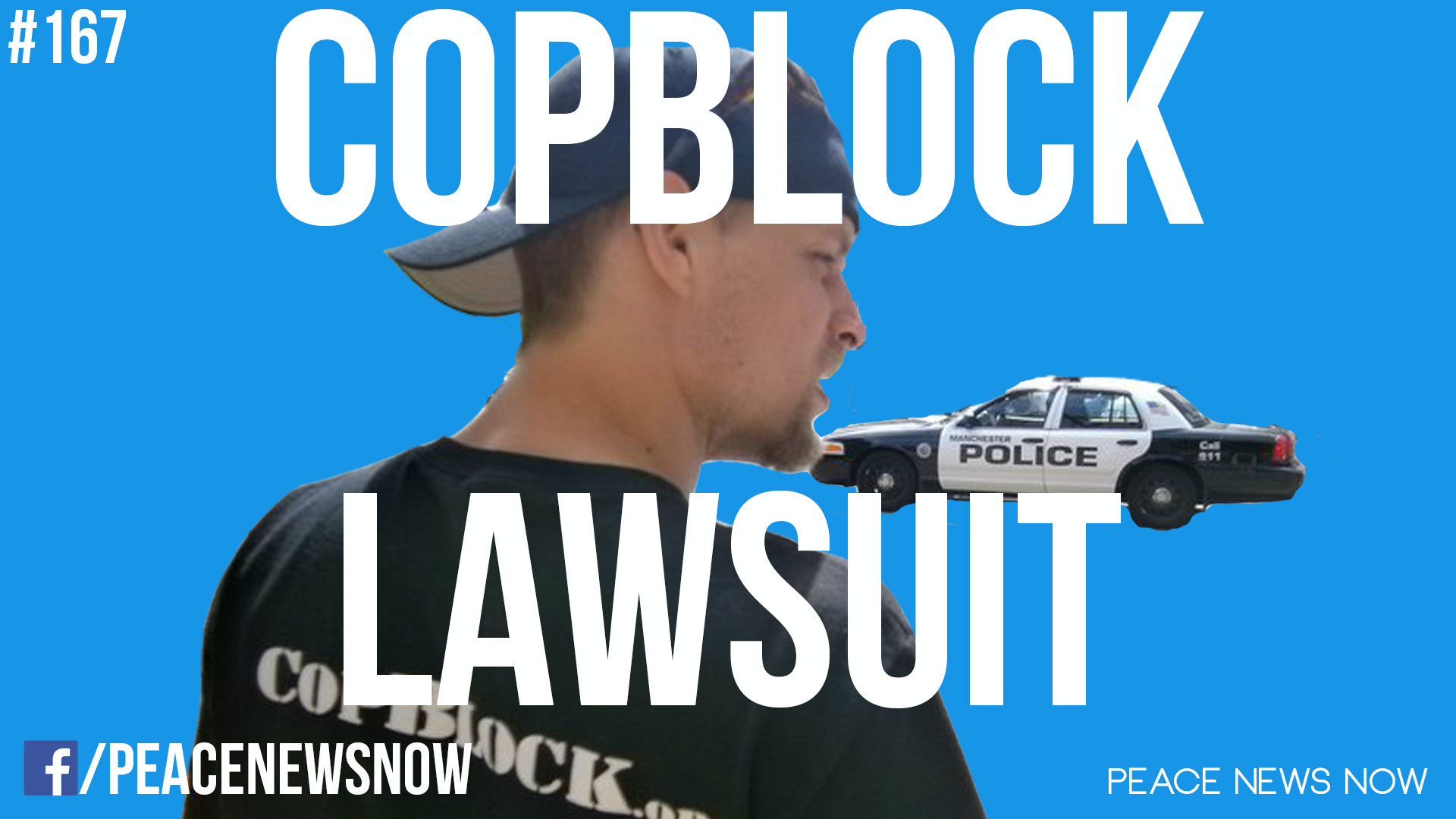 Monday, August 5th 2013. 1 ounce of silver is 20 dollars. 1 Bitcoin is 108 dollars. Peace News Now is brought to by friends of http://WeUseCoins.com and by you, the listener.

Ademo Freeman, the founder of the decentralized police accountability organization http://CopBlock.org, is suing the bureaucrats calling themselves “the town of Greenfield, Mass” and the Greenfield police officers who arrested him for filming in 2010.

For the “crime” of filming police officers at a police station, he and his partner Pete Eyre were charged with “felony wiretapping.” He and Pete courageously represented themselves in court and convinced the jury to find them NOT GUILTY in July 2011.

The complaint alleges that the Town bureaucrats are responsible for having not provided training to officers about the public’s constitutional rights to film law enforcement, and that as a result of the failure, quote, “it was highly likely that the Greenfield police officers would unconstitutionally arrest people for openly recording police conduct or conduct of other governmental officials.”

When Ademo and Pete questioned why they would not be permitted to film ‘the people who work for them’ , Defendants Dodge and Other Greenfield Police Officers placed Ademo & Pete under arrest for trespassing.

They were kept overnight in a cold cell without their pants or blankets. They were denied from making a call to reach legal counsel. They did not have an opportunity to be released on bail. Ademo’s mobile home was illegally searched and then towed. The Greenfield Police kept their cell phones and camera as evidence.

This kind of criminality demands accountability, and who better than the founder of police accountability website http://CopBlock.org to pursue personal justice in this issue. Ademo doesn’t seek departmental accountability, but names names: Todd Dodge is the criminal. He is the defendant who stands charged of acting with reckless disregard for another man’s constitutional rights.

Ademo says he suffered from symptoms of “emotional distress” after being charged, even though, quote, “he knew he had not violated the law, but he worried that a felony conviction would result in a substantial jail term.”

According to the lawsuit, the police arrested Ademo to intimidate him, and to serve as a lesson to Ademo and others that attempting to openly record police officers in Greenfield could result in arrest. The police intentionally caused criminal charges to be brought against Ademo withOUT probable cause and WITH malice.

Ademo’s lawsuit alleges a number of violations including against freedom of speech, the state’s Civil Rights Act, freedom from malicious prosecution, due process, and freedom from retaliation.

Ademo is seeking compensatory and punitive damages, and the payment of legal fees and costs in his suit against Greenfield.

The case will be heard by US District Court Judge Nathaniel Gorton.

The defendants have yet to file an answer to the complaint.

Lamassu Bitcoin Ventures is appearing in the September 2013 issue popular Mechanics. Lamassu is the company responsible for the Bitcoin Machine, the sexiest atm on the market. This compact desktop-sized machine converts fiat in your hand to Bitcoin on your phone in just 15 seconds. It doesn’t just take US dollars, it accepts currencies from over 200 countries. Like a proper ATM, its internal steel vault is securely bolted to a wall, stand, or countertop. Complete with intuitive user-interface, the web-based backend allows owners to choose from leading exchanges such as Mt. Gox and Bitstamp. Because it was built and coded by freedom-loving network security experts, the Lamassu Bitcoin Machine is completely license-free. Check it out for yourself and join their mailing list at http://lamassubtc.com

And learn more about bitcoin at http://WeUseCoins.com

Author and founder of http://FPP.CC , Darryl W Perry wrote on his blog yesterday that Chris Christie and Rand Paul are BOTH wrong about Libertarianism.

Darryl points out that Rand isn’t for ending the long-failing war on terror. In fact he’s FOR hunting and killing terrorists with drones, turning faceless bureaucrats into judge, jury, and executioner. Concord Police have labeled Free Staters domestic terrorists, so would Rand Paul have the government hunt and kill them?